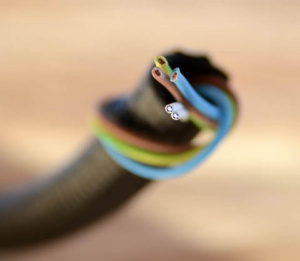 Telefónica presented a pioneering innovation project in Spain based on plastic optical fibre (POF), a solution for home connectivity which is easy to install and guarantees up to 1 Gbps for customers. In addition, in order to optimize the connectivity, Telefónica demonstrated the potential of the 60GHz Wi-Fi technology, which can offer theoretical connectivities of up to 4600 Mbps.

Plastic optical fibre is a fibre with an 1mm core and a total diameter of 2.2mm which provides connectivity in the home with simple installation (it is sliced with a cutter), without connectors and at a cost considerably lower than glass fibre. All the existing pipelines in the home can be used to install it, without any risk or inconvenience. At the same time, it is secure because it cannot be intercepted and is immune to interferences.

Telefónica has conducted a plastic optical fibre pilot scheme in about 30 homes, each with up to four fibre outlets, with the deployment of a hybrid POF network (wired backbone) + Wi-Fi, with a smart Wi-Fi amplifier as the access point to expand the coverage. Telefónica’s technological partner in this initiative is chipset provider KDPOF, a Spanish startup whose technology has become the Ethernet standard for plastic optical fibre, according to the IEEE (Institute of Electrical and Electronics Engineers) and the ETSI (European Telecommunications Standards Institute).

The basic elements for the installation, in addition to the plastic fibre, are the media converter and the KDPOF chipset inside it. The media converter holds the plug, provides two Ethernet ports and permits the connection of two different POF branches.

Similarly, in order to optimize the connectivity, Telefónica is testing 60GHz Wi-Fi technology with large bandwidth and a theoretical maximum of 4600 Mbps. This new technology has various scopes of application, including rapid content download, high-quality video streaming without decompression, wireless docking and virtual reality device connectivity.