Traditionally, the industrial factory floor automation has comprised three levels. The first is the device and sensor level with low-level machine code controls, actuators, drives, motion devices, and sensors. The next level, the control level, contains the controller networks based on typical factory PLCs controlled by proprietary and non-proprietary field-bus networks. Finally, at the top, the enterprise level encapsulates the intranet based on Fast Ethernet information networks that connect PCs and laptops via Ethernet NICs. Each one of these levels operates efficiently and separately.

In trying to solve the issue of several protocols running at different levels and not being able to exchange information seamlessly, several companies have developed Fast Ethernet networks that operate over POF. The ability to seamlessly merge the field-buses with the enterprise intranet while operating on Fast Ethernet protocols enables devices on the factory floor to be assigned IP and/or MAC addresses.

Factory equipment manufacturers can offer the ability to remotely perform tasks like running diagnostics, making machine sequence changes and production process. Within the factory, the engineer now can remain at his desk while carrying out the tasks that once would only have been accomplished by connecting locally with the factory PLC.

This solution is limited, however, as commercially available Industrial Fast Ethernet transceivers operate at 100 Mbps on SI-POF links only up to 50 meters. Add to that the demands of the increasing complexity of machines and systems interconnected in the factory, a Gigabit backbone will be required. The current technology for physicial layers is no longer sufficient.

The typical indsutrial application for the KD1000 industrial products is as PHY interfaces to Profinet or Ethernet IP switches. 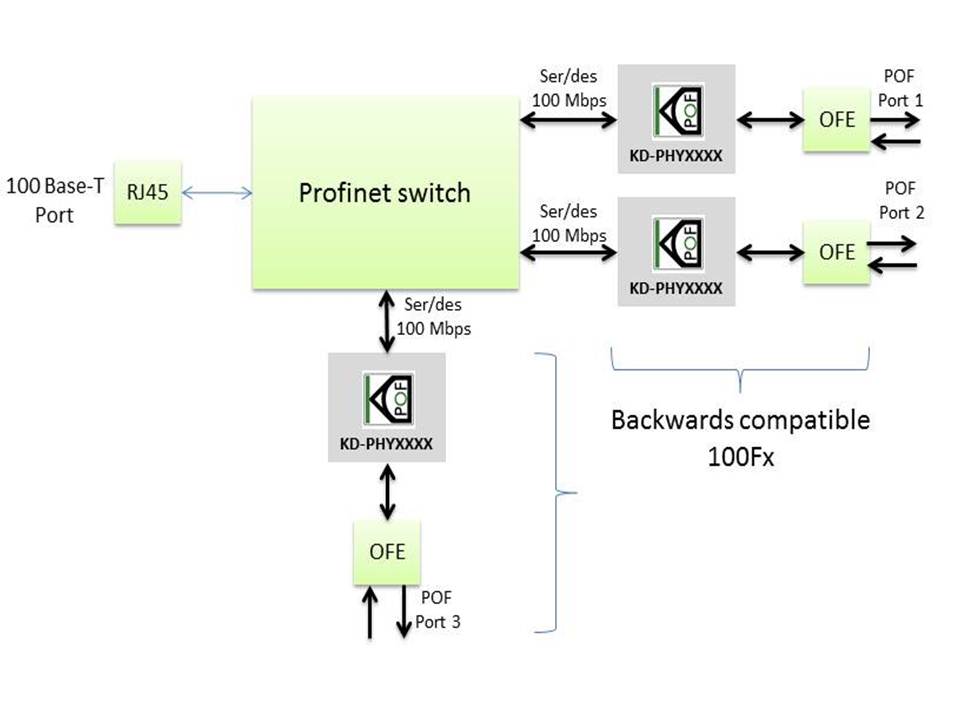 In this example three KDPOF POF PHY chips provide the interface to other POF links, allowing the switch to move packets around between these POF interfaces and the 100Base-T port. Thanks to its integrated Ser Des, the KDPOF PHY interfaces the switch to the POF without any bottleneck or latency hit. 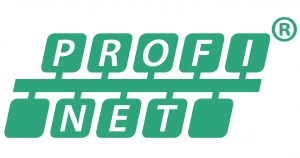 Other POF applications include alternative energy generation. For example, in the case of solar power generation, POF has applications on un tracking control and communication boards and solar farm substation automation and protection relays. In the following figure such an application is shown:

Wind generation also shows a set of promising applications for POF with Fast Ethernet links. Either as the backbone connecting all the  turbine control units and condition monitoring systems or as the wind farm networking system, POF with the KDPOF Fast Ethernet technology is ideally suited.

Last, but not least, small form-factor pluggable (SFP) modules are extensively used in the Industry as a means of providing flexible connections to network switches. KDPOF has an industrial grade serial PHY that allows an efficient implementation of a Fast or Gigabit SFP with a minimum number of chips. The SFP is a compact, hot pluggable transceiver used in many telecom and Industry applications. The form factor and electrical interface are specified by a multi-source agreement (MSA). It interfaces a network device mother board (for a switch, router, media converter or similar device) to a POF or other networking cable. It is a popular

industry format jointly developed and supported by many network component vendors. SFP transceivers are designed to support Gigabit, and other comunications standards.

Operating in industrial environments, KDPOF technology provides a greater coverage for Fast Ethernet installations throughout the factory floor. KDPOF technology, thanks to its native capacity achieving modulations and seamless component optimization, provides Fast Ethernet (100 Mbps) over SI-POF links up to more than 150 meters using off-the-shelf red LEDs and connectors. This translates into a true, effective capacity upgrade of the existing industrial buses while maintaining the installed low cost POF infrastructure.

For these applications where true 1 Gbps bandwidth is needed, KDPOF offers also a physical layer capable to extend links up to 85 m with standard industrial power margins.

Thanks to the partnership between KDPOF and Avago, an integrated solution of PHY chip along with optoelectronics fiber and connectors, is available for the tight specs of the Industrial market. Based on its well know portfolio of optics products, Avago has developed a FOT (Fiber Optics Transceiver) specially suited for KDPOF technology. This close collaboration between both companies has translated into an integrated solution which outperforms other Fast and Gigabit grade industrial LAN physical layers.

We use cookies to ensure that we give you the best experience on our website. If you continue to use this site we will assume that you are happy with it.Ok