Today’s consumers demand more electronic devices in cars, such as anti-collision cameras, DVD players, and navigation systems. This trend has led to the deployment of POF in automotive networks. Its bandwidth as compared to traditional automotive cables and ease of use, coupled with its robustness against vibrations and external noise sources, make POF ideal for in-vehicle embedded multimedia networks.

The field of infotainment (information and entretainment) automotive buses is dominated by standard solutions like LVDS point-to-point links or propietary technologies like MOST® (Media Oriented Systems Transport). MOST, which defines a full communications stack from the physical layer to the application layer of the OSI model, is usually deployed in ring topologies. Three versions of MOST have been released thus far providing from 25 Mbps to 150 Mbps over POF.

A consortium of several car makers and suppliers has been set up with the name OPEN. The OPEN Alliance goal is to define a Ethernet compatible, UTP based 100 Mbps car bus and a next generation 1 Gbps alternative.

The Growth of ADAS

As in the human body, numerous functions in ADAS must be implemented and networked: sensors –for example radar, cameras or ultra sonic – processing units and actuators like steering, brakes, ESP and airbag. Taking into account the complexity of the use cases and the different vehicle areas that have to exchange information, it is obvious that an adequate network infrastructure is of essential importance for the efficiency of the system.

Driver assist, safety and infotainment systems are driving the migration to Ethernet Backbone networks. It is expected the introduction of Ethernet to ramp up first in luxury class vehicles, followed shortly afterwards by other categories. According to Bosch, by 2020 many premium class vehicles will have up to 35 Ethernet ports (20 on average) while other vehicle classes will have up to 20 (eight on average) ports. The chart data above includes passenger vehicles, SUVs and light trucks, but not commercial vehicles. From a functional point of view driver assist systems have started to enlarge the functional range of classical infotainment systems.

Considering the classical domains of electric/electronic architectures in vehicles it easily becomes clear that with the introduction of driver assist systems, a new, to date non-existent domain has to be created. And instantly the question arises, which network technology might be suited for that new domain. Does one of today’s existing technologies – CAN, FlexRay, LIN or MOST – or new technologies -ETHERNET- have the potential to accomplish the task at hand? Or does it require another show of strength to introduce a technology not yet established in the car environment?

What is clear is that the automotive industry is demanding new network capabilities at the same time that cost and weight is contained or even reduced. KDPOF products are in a great position to fulfill all these conflicting demands thanks to our Gigabit capabilities over an optical, low cost and already qualified transmission media.

Thanks to the KDPOF´s PHY´s rich link power margin it is possible to operate the system in the lower 1o0 Mbps speed and “use” the extra margin to accomodate up to nine in-line connectors. The possibility to extend the usage of in-line connectors is a key feature for certain car and bus makers which rely on separated wire harness sections to build up the complete car network. The native EMC robustness of Optical Fiber ensures a “hazel-free” implementation with plenty of margin for other surrounding systems which either radiate or are susceptible to electromagnetic noise.

You can find more information on the different alternatives for POF transmission at 100 Mbps in this PAPER.

In a four-camera surround view system the driver is able to to see 360-degrees view around the vehicle. In future more than four cameras (up to eight cameras) will be 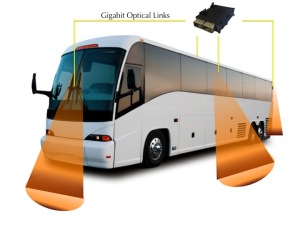 connected to the system via Ethernet. At least one 1 Gbps network will be needed if enough image quality and low latency is required. The surroundings can be seen from different perspectives, including the top-down bird’s eye view perspective and different 3D visualized views. Such views eliminate blind spots and provide visual assistance when the driver is backing up, turning corners or merging.

The system architecture is typically based on point to point links between each camera and the Image Processing Unit. The KDPOF PHY, thanks to its DVP interface facilitates the implementation of this system.

In the near future the car will incorporate several antennas. If each antenna is routed to its respective Electronic Control Unit with its own cable, soon the complexity will be unaceptable. The Antenna Hub is a module that routes all the signals from each antenna to an Ethernet bus connected to all of the receptors of the signals. 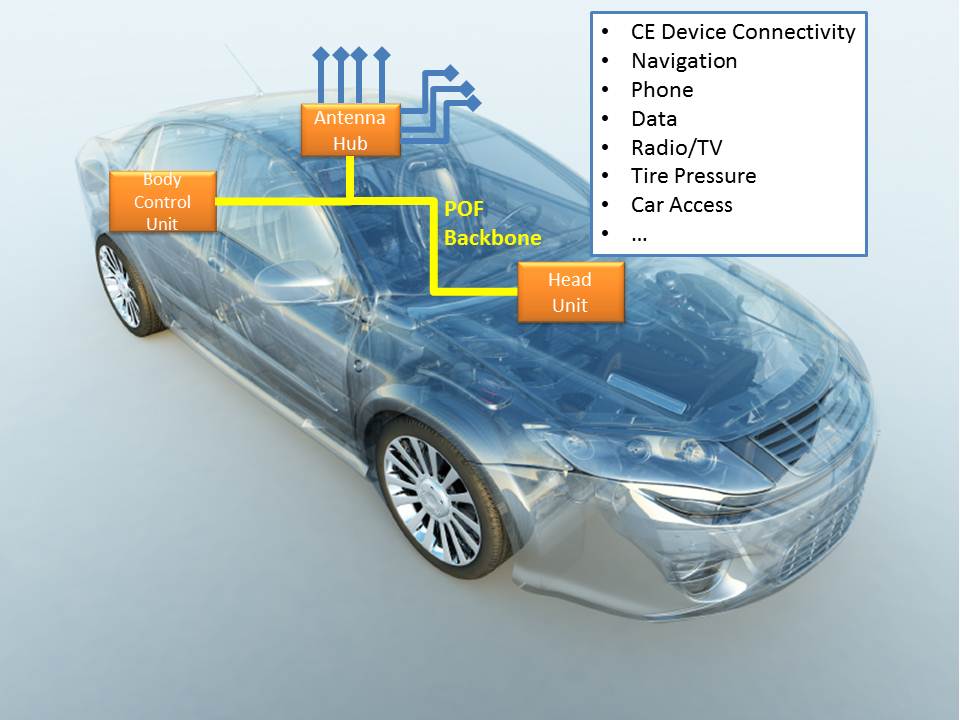 The advantages of the Antenna Hub concept are clear:

All the major car makers agree on the advantages of segregating the different fucntional domains within the car. With this new paradigm the car will be the result of a number of different domains working and sharing information between each other. Examples of domains are power-train, body, transmission, and safety systems.

Within each domain, connectivity will be chosen to perform the needed functions and meet the domain requirements. Typical intra-domain networks will be based on Flex-Ray, MOST (for legacy), OPEN (future to be based on BroadR-Reach), CAN or LIN.

Going one level up in the network hierarchy, a broadband network will be needed to intercommunicate all the domains in a reliable way. Ethernet seems to be the best choice as of today but the PHY layer most appropriate is still under discussion.

One optical PHY based on POF will deliver the needed 1 Gbps which fulfills all the requirements of today´s and future systems at the same time that advantages in terms of cost and weight are also delivered.

KDPOF technology is able to provide a physical layer of more than 1 Gbps, which is fully compatible with any topology, fiber, connectors and optoelectronics components. Due to low latency and guaranteed Gigabit rate, KDPOF technology is suitable for the implementation of ADAS (Advanced Driver Assistance Systems) over any kind of POF cabling topology. 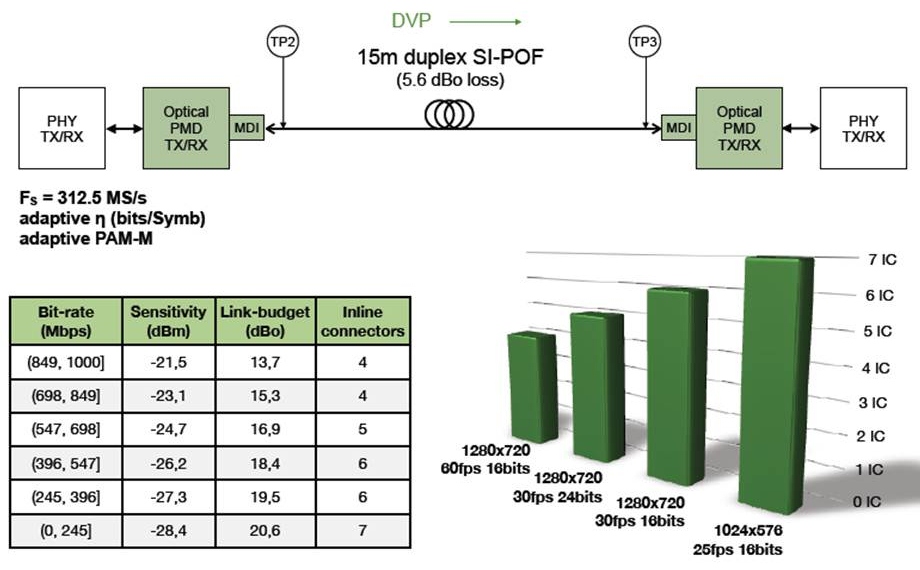 seat monitoring, and night vision. Depending on the camera resolution and frame rate the hugh link margin enabled by KDPOF´s PHY can be employed in accomodating several in-line connectors or, equivalently, increasing the link length. The following figure shows an example of the flexibility provided by KDPOF´s PHY when used in point-to-point camera-display links.

Thanks to the native Ethernet compatibility of the KDPOF technology, it is possible to integrate seamlessly KDPOF´s PHY with the proposed OPEN Alliance new automotive bus.

We use cookies to ensure that we give you the best experience on our website. If you continue to use this site we will assume that you are happy with it.Ok